Peace building, justice, harmony… I’m all for it, when it’s based on facts and when we have the truth on our side.

In the last couple of years, prior to the current ones, I had some other news websites that I have not listed here because unfortunately those had to be canceled due to insufficient funds. However, a lack of funds will not hold me back of joining the real truth movement.

The websites listed above are the ones that I currently manage. There are a few more but these are the ones I want to draw your attention to. Each one works with a specific theme. Though each one represents a different approach, they all have a common goal: To spread truth and to motivate the people to join the worldwide resistance against oppression and tyranny.

Unfortunately, the truth movement, including alternative news outlets, has already been sabotaged in many ways by those who are in power and in control of large parts of the internet. This sabotage is meant to divide the truth movement because the ruling classes are encountering a growing awakening and force of resistance to their regimes and corruption.

Make no mistake about it, there’s a huge battle going on between good and evil. You can’t always see it clearly in your daily life but when you look closely you can see the signs.

All the websites on this page can help you to detect those signs, in a peaceful and honest manner. Never and nowhere do my websites call for violence. Should you encounter such allegations, know that those allegations are not based on facts nor on truth.

With Truth News International readers can follow the most important news items. Of course, there’s much more news in the world that is not listed on Truth News International but then again, it’s not an ordinary news site. What you’ll find there are facts that you just have to know, and often won’t find on the regular news sites. Even alternative news outlets tend to ignore certain information, out of fear of being blacklisted or because they are controlled opposition. It’s really as simple as that in most cases.

4Key Channel (4key.net) is the only payed website that I have at this moment, all the others are provided for free by WordPress. The reason for this should be obvious: Not enough funds.

With 4Key Channel I try to provide a solution to the growing trend of people wanting their news and info in video format, since less and less people have enough time or courage to read detailed articles and reports online that require one’s attention for an extended period of time and that require a certain level of specialized knowledge. With video material there’s a higher level of entertainment involved which might prompt more people to click the “play” button and let the information just roll over the screen while sitting back and enjoying “the show.”

ReblDyne is again a different concept. Here the approach is more with a focus on the actual rebels, or the rebellion, against tyrannical regimes and legislation, and on technology that is being built which we need to keep our eye on since it will be used against the rebellion a.k.a. the truth movement. Attempts to discredit and divide the rebellion are real and must be exposed.

The Daily News Dealer website collects news from many other websites, provided in the form of RSS feeds. The website is very easy to use and works mostly on its own, since RSS feeds are collected it doesn’t require a lot of maintenance from my part. Overviews are provided by area (continents) and there’s a ‘world news’ section where the most important news is listed that impacts everyone’s lives. In addition, there’s also an entertainment and sports section available to also attract the younger members of the worldwide audience.

United Nations Brigandage and USE FASCCOM focus specifically on crimes and corruption committed by the UN and the European Union. ‘USE’ stands for United States of Europe, which is the ultimate goal and construct of the current EU. For a full explanation of ‘FASCCOM’ read the description on the site.

On both sites the proven cases of heinous crimes (against humanity) and misconduct are stacking up. As a result, an additional website has been created: OMNI-JUR. Here I focus on the problem that ‘diplomatic immunity’ poses, since it makes legal actions against the UN (and EU) impossible.

A 100,000,000-signature petition has been launched to build up international support for the lifting of the diplomatic immunity of the UN, in a first phase. 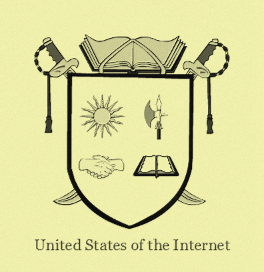